Labour's Car Tax will unfairly punish Kiwis who don’t have the option right now of switching to an electric vehicle.

Labour’s Car Tax policy will unfairly hurt farmers, tradespeople and low-income earners for whom low-emission vehicles will still be too expensive or unsuitable for their lifestyle. The people who benefit will be higher-income earners who now don’t have to pay as much for a Tesla. We don’t think it’s fair to make tradies pay more for a Hilux so wealthy executives can get a discount on their next electric car.

Labour told Kiwis it ‘dumped’ the Car Tax policy before the election. Now Transport Minister Michael Wood has said Labour started working on it again straight after the election. Make no mistake this is just another broken promise on tax.

National believes there are more positive ways we can encourage the uptake of electric vehicles. At the last election we supported moves to exempt EVs from fringe benefit tax, extend road user charge exemptions, allow EV users access to bus lanes and free parking, and provide more funding for development of low-emission technologies. 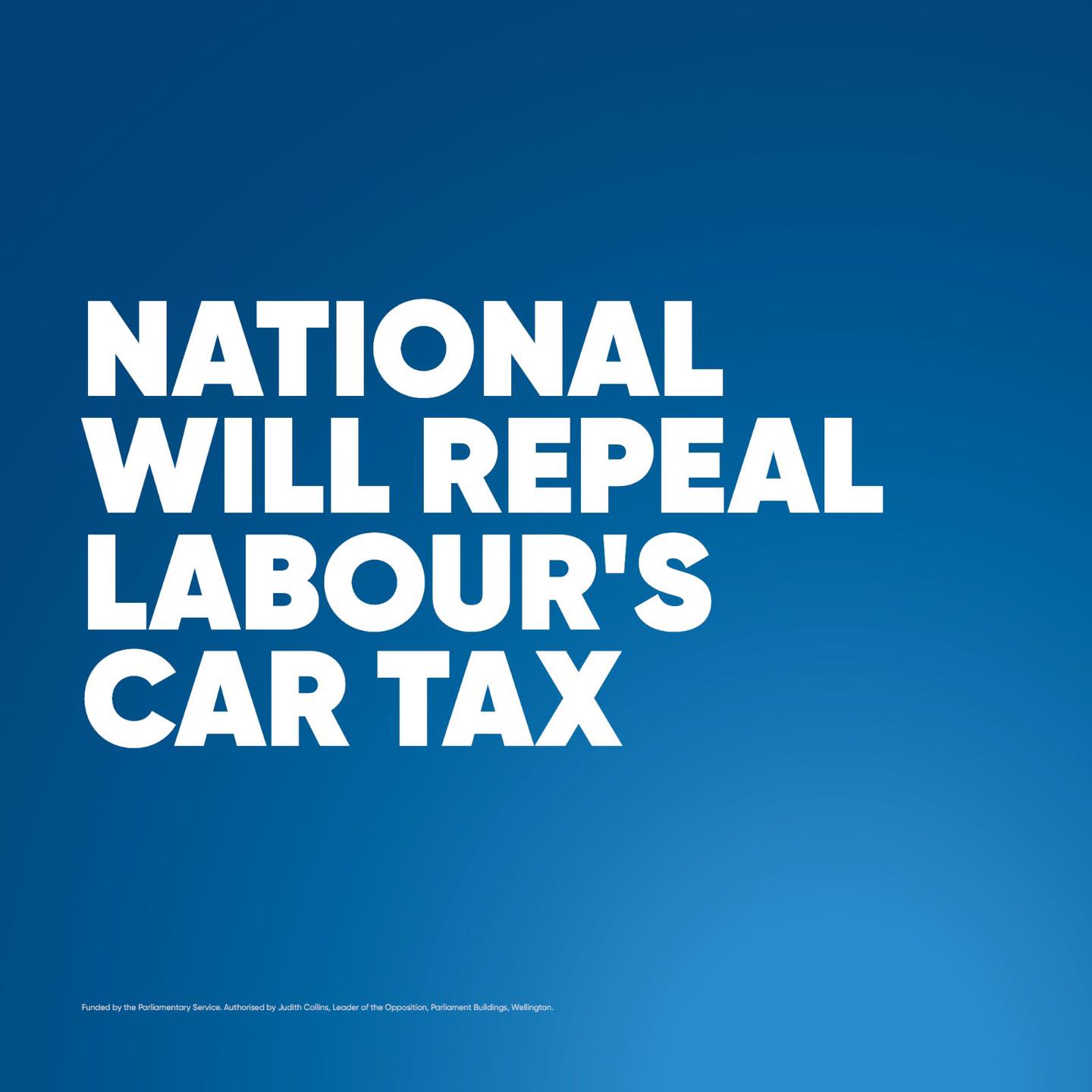 National will repeal Labour's Car Tax. Simple as that.

You can read more from Michael Woodhouse here.

The arrival of the belated interest deductibility and bright-line rules discussion document brings with it confirmation of what an unprincipled mess the proposed legislation is.

National opposes the Government’s ill-advised approach to dealing with the housing crisis and, in fact, argue that these measures will contribute to further housing challenges. We know investors and landlords have a role in New Zealand and the demonisation of this small group of people is bizarre and divisive behaviour from the Government.

Minister Woods’ own advisors cautioned her that these changes could increase rents, impose additional costs on lower income tenants, and increase reliance on state and emergency housing, but she ploughed on ahead anyway.

National opposes these changes, and we will reverse the interest deductibility changes.

Our housing plan will actually get more houses built.

You can read more from Andrew Bayly and Nicola Willis here.

No more excuses for the Govt’s vaccine shambles

Confirmation that a million doses of the Pfizer vaccine coming in July removes the last remaining excuse for the Government’s pathetically slow COVID-19 vaccine roll-out. The Government said we would be at the front of the queue, but New Zealand is the second slowest in the OECD and 115th in the entire world.

This is hardly the ‘year of the vaccine’ that the Prime Minister promised.

The Government still needs to explain:

MPs around the country are being contacted by people in Group 3 who have no idea when they will get the vaccine. DHBs, GPs, and pharmacists have no idea either.

In summary, the booking and IT systems are a mess, there aren’t enough staff, communication has been poor, the Government has had lacklustre reporting, and the roll-out is slow. And yet, this Government is constantly telling us everything is going to plan.

Are they planning to fail? The Government looks set to fail to meet its target of everyone being offered a COVID-19 vaccine by the end of the year; just as the Auditor-General has warned.

You can read more from Chris Bishop here.

The Government still hasn’t delivered any legislation to give police new powers to place Firearm Prohibition Orders against dangerous gang members, despite promising New Zealanders it would do so.

Every day the Government delays on this issue, gang members go from strength to strength. Membership is already at more than 8000, it’s only a matter of time before we have more gang members than police officers.

Firearm Prohibition Orders (FPOs) is not a new idea, it was recommended to the Government back 2017 and National has put forward the legislation a number of times but the Government has refused to act.

National’s FPOs will allow Police to conduct warrantless search powers and take firearms out of the hands of gang members. The legislation will also make it illegal for a gang member to obtain a valid firearm license.

We will keep National’s FPOs legislation on Parliament’s order paper until the Government brings its promised legislation to the table. Police needs the tools now so they can crack down on our growing gang problem.

You can read more from Simeon Brown here.