“This is yet more evidence of very slim ICU margins that we have at the moment and Andrew Little’s failure to build capacity over the 18 months since the first outbreak may prove crucial.

“Lakes, Tai Rawhiti and Northland DHBs have a high proportion of Māori who are at increased risk of catching Covid and ending up in ICU. Several of these DHBs have had periods at, or close, to full capacity.

“This is especially concerning for Lakes DHB, which has one of the lowest numbers of ICU beds across the sector – four – and was at 100 per cent capacity five times during the first three weeks of the current Delta outbreak. What would have happened if there had been a Covid outbreak in the Lakes region?

“Northland is included in these figures as another region with a high proportion of Māori, and one of concern at the moment. However, it seems to have some capacity, albeit in the context of a total of eight resourced ICU beds.

“Other DHBs such as Bay of Plenty have had high ICU occupancy rates over this period but do not have as large a Māori population as Lakes, Tai Rawhiti and Northland.

“We urgently need to build new ICU capacity, both in human and capital resourcing.

“National’s ‘Opening Up’ Covid response plan sets out 10 things to do now, targets for when policy settings can relax and an indication of new resources required in the health system.

“Andrew Little’s surge management plan is a disaster. It is not sustainable. Instead of sinking millions into a pointless restructure of the health system, he should be building sustainable ICU capacity.” 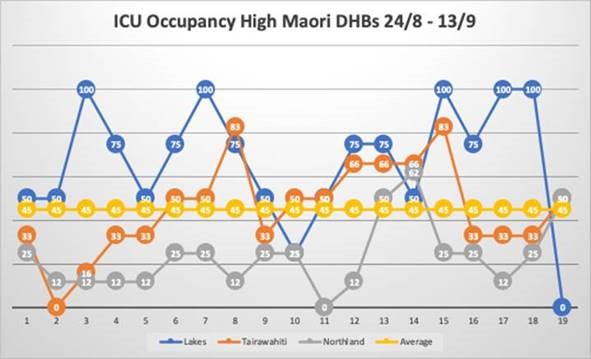