The Government’s announced ICU spend up is one Christmas too late, National’s spokesperson for Health Dr Shane Reti says.

“This is a paltry figure when he was advised by specialists last year to triple the number of beds. If he hasn’t figured it out already, 355 negative pressure room ward beds are not 355 ICU beds.

“His failure to prepare ICU beds is one reason why Auckland has been in extended lockdown, why businesses have failed and why 100,000 Kiwis have had their procedures cancelled.

“Many of the announcements today are not actually new builds but “robbing Peter to pay Paul” by converting ward beds, administrative space and elective surgery beds into ICU beds. The hope has to be that these beds will then serve a dual purpose otherwise the lost inpatient beds will eventually add to escalating waiting lists for people to see specialists and have cancelled procedures.

“Andrew Little has said the first ICU beds will be next July which will be too late if Omnicron lands in NZ. We need to see a delivery schedule and clear evidence that funding has followed the greatest need.

“When in government, National spent more than $200 million on health infrastructure in every single one of its last 5 years while at the same time successfully balancing service delivery and getting waiting lists down.

“Late announcements, poor planning, 30,000 people waiting more than 4 months to see a specialist – this is just another fail for Andrew Little and a Labour government that is more interested in health reforms than keeping New Zealanders safe during a pandemic.” 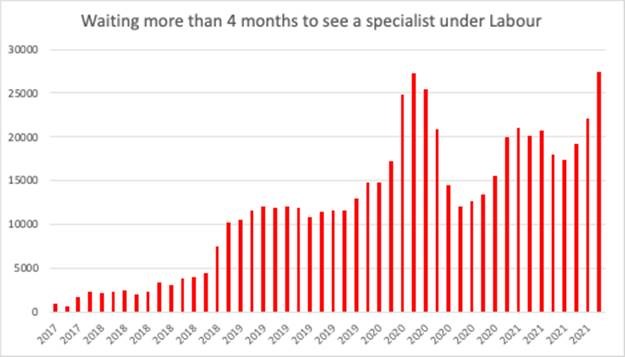