Demand the debate on Three Waters

The Government’s plan would shift Three Waters from council control to being managed by four new regional water entities.

This water entity model is fraught with problems, and is a serious threat to local control and accountability.

The touted cost savings haven’t been properly explained, the water entities won’t deliver realistic economies of scale as they have been promised to, and the reforms will result in ratepayers’ water bills cross-subsidising neighbouring areas.

Most significantly, the plan would strip power from local communities. Stop the assets grab and sign our petition here. 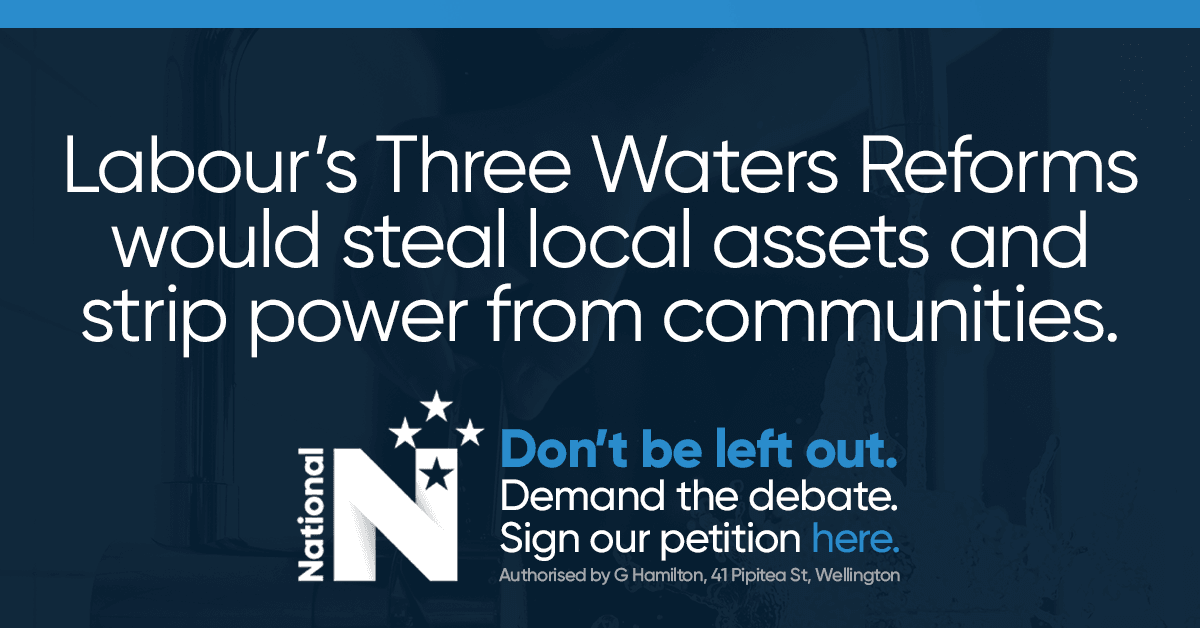 In a move tantamount to theft, water assets that residents have paid for decades to own will be taken from the control of their democratically-elected councils. Assets will be bundled into these new mega-entities, each spanning hundreds of kilometres and made up of multiple layers of bureaucrats and decision-makers.

Mayors across the country are urging the Government to hit the brakes – for months, many have been crying out for more detail and more time to consult their communities.

Labour is trying every tactic to sway opinion: a taxpayer-funded $4 million negative ad campaign; a $2.5 billion inducement to councils; and now news that some councils might be eligible for top-up payments to secure their support.

The last resort can only be one thing: making the reforms compulsory for councils.

If that were to happen, it would be an intolerable breach of community independence, and the rights of councils to make the best decisions in the interests of their local residents.

This is just the latest example of Labour’s relentless appetite for amalgamation that we’re seeing elsewhere (in planning, vocational education, and healthcare).

National will continue to oppose Labour’s centralisation and control agenda, and we will fight for communities to keep their voice.

The Government must dump their deeply flawed Three Waters plans.

Protecting community decision-making is a priority for National. We need to keep the ‘local’ in local government.