Demand the debate on the Ute Tax

National is calling on the Labour Government to scrap the Car Tax they never campaigned on.

The Ministry of Transport carried out consultation on the Government’s “feebate” policy in 2019 before it was ditched. Labour then made it clear at the 2020 election that the feebate scheme was not its policy, only to now turn around and resurrect it.

Off the back of National ruling out the punitive car tax last term, during the 2020 election campaign Grant Robertson also promised New Zealanders ‘no new taxes’ under a Labour Government.

Yet Labour has since announced they will impose a tax on the importation of any vehicle that is petrol or diesel. The way Labour has gone about forcing its Car Tax onto New Zealanders has been dishonest and undemocratic. 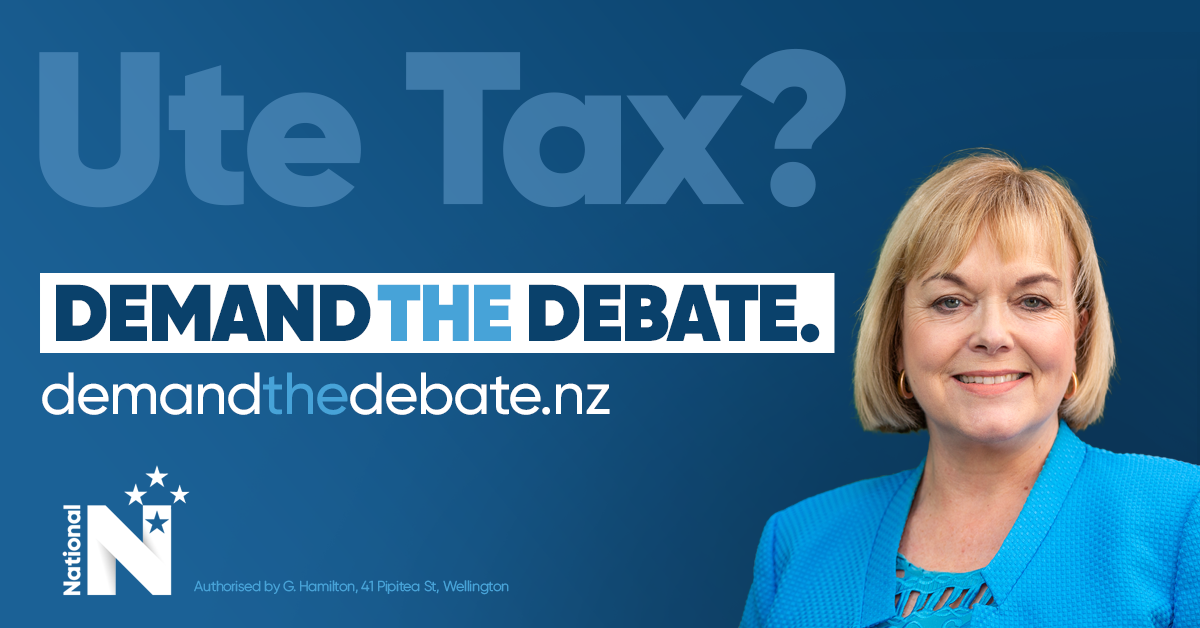 If Labour wants to tax people on lower incomes to make it easier for wealthy people to buy electric cars, then it should have been honest about that and campaigned on it.

The Government has given no assurances around how much public consultation there will now be on its Car Tax as the legislation is worked though. Given that rebate applications opened on July 1, it would appear the Prime Minister’s mind is already made up.

The uncomfortable truth for Jacinda Ardern is that when her Government proposed its Car Tax back in 2019, Kiwis overwhelmingly rejected it.

Public consultation figures supplied to National at the time, by then Associate Transport Minister Julie Anne Genter, revealed 1860 of 2687 submissions (69%) were opposed to the Car Tax. This fact was omitted in recent Budget Cabinet Papers that said consultation showed the policy was “well justified” and arrogantly ignored the majority of public submissions made by Kiwis against it. (Pg 3 & 5, para 16 & 29)

Treasury also warned the Government it would unfairly punish New Zealanders for whom low-emission vehicles do not yet exist to suit their jobs or their lifestyle.

Recent Cabinet Papers on the Feebate Scheme note that “drivers with a genuine need for 4WD or open tray format vehicles will have little ability to avoid paying a fee”. (Pg 5, para 33)

The Regulatory Impact Statement on this policy also points out that the measures of  “implementation, compliance and administration costs” and “costs and benefits are neutral” are either worse or much worse than doing nothing/status quo. (Pg 37)

It’s not fair to make farmers, tradies and large families pay more for their cars when they don’t have any other option, just so wealthy executives can get a discount on a Tesla.

It’s also not fair to force a car tax on New Zealanders without letting them have a voice, particularly after Labour promised them no surprise taxes after the election.

Labour made a point of removing the car tax from its policy manifesto pre-election, then started working on it the second it was re-elected. This is another underhanded broken promise from Labour on tax.

National believes there are better ways we can encourage the uptake of electric vehicles. At the last election we supported moves to exempt EVs from fringe benefit tax, extend road user charge exemptions, allow EV users access to bus lanes and free parking, and provide more funding for development of low-emission technologies.